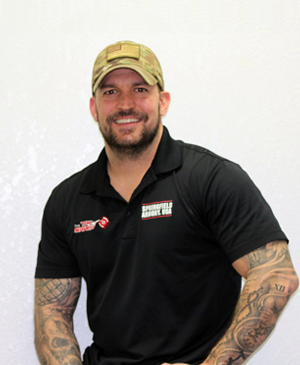 Justin graduated from Western Illinois University in 2005 with a Bachelor’s degree in Law Enforcement Justice & Administration. He started his career as an Asset Protection Investigator and quickly advanced to management. He later attended the Police Training Institute at the University of Illinois in 2008 and worked as a patrolman for the city of Macomb. In 2010 he enlisted in the Illinois Army National Guard with A Co 1/178 Infantry Regiment in Bartonville IL. In 2013, he completed OCS and was commissioned as a first lieutenant. Since his commissioning he has served as an Infantry platoon leader, military police assistant operations officer and military police company commander for the 404th MEB HHC in Normal IL. Justin is currently serving as the Commandant for Combined Joint Task Force Horn of Africa and is continuing his education in the Business and Organizational Security Management Masters Degree Program at Webster’s University, FT Leonard Wood MO.